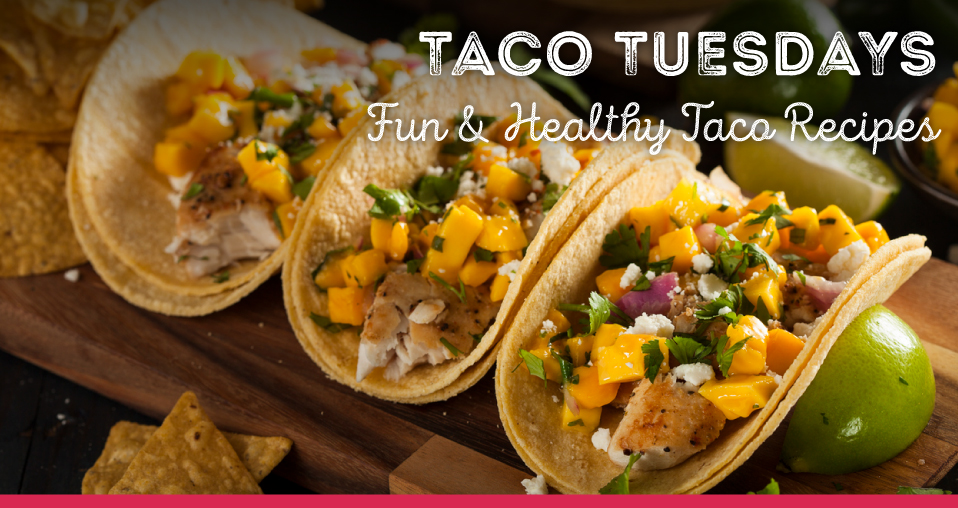 We don’t know about you, but we’d be hard-pressed to think of a time where we ever felt tired of tacos. Whether it’s fish or chicken, melt-in-your-mouth carnitas or something creatively vegetarian, we’re up for tacos whether it’s Tuesday, Wednesday or Sunday. But sometimes, we’re looking for a healthier take on our favorite meal — and for that, we’ve got you covered. From low to no carb to bite-sized breakfast options or something with squash, here are some easy taco recipes sure to satisfy your taco tooth.

Growing in popularity as of late, breakfast tacos are starting to compete with the ubiquitous breakfast burrito due to their undeniable deliciousness. Here’s a relatively easy morning meal that’s a departure from your usual delivery system for sausage and eggs. This recipe makes enough for about four tacos, provided you’re using standard sized corn tortillas.

• Three chicken sausages, cut into small slices
• One onion, diced
• ¼ cup green bell peppers
• Salt and pepper, to taste
• One tablespoon of olive oil
• One clove garlic, minced
• One habanero pepper minced, with seeds removed — unless you want a lot of heat
• ¼ teaspoon of cumin
• One can of black beans
• Six eggs
• One cup of salsa
• One cup of cheddar cheese
• Four corn tortillas

In a small saucepan, add garlic with a hint of olive oil and cook for about two to three minutes. Add black beans to the pot, stirring in cumin and habanero pepper.

In a mixing bowl, crack eggs and add salt and pepper to taste, whisk together and set aside.

Coat the same skillet with additional olive oil or non-stick cooking spray and add the eggs.

Scramble until cooked to the desired level and remove from heat. Use the skillet to heat corn tortillas and assemble tacos — layer beans first, then eggs, then chicken and vegetables.

Top with salsa and shredded cheese and serve.

In the spirit of breakfast, we’re casting aside your existing notion of an omelet and raising you one omelet-taco hybrid. This recipe is perfect if you have leftover taco meat, salsa, guacamole or some pico de gallo. We’ve compiled this recipe for one large omelet, but feel free to multiply if you’re cooking for more than one.

In a large skillet, heat oil and add in garlic and jalapeno for two to three minutes

Add in spinach and meat and heat all the way through. Set aside.

In a mixing bowl, crack eggs and whisk together with salt and pepper.

Coat the same skillet with non-stick cooking spray and heat. Add eggs to the pan. Right off the bat, they’ll start to set.

Use your spatula to press uncooked egg to the edges and repeat until the mixture no longer has any visible egg liquid.

As the cheese starts to melt, add in the filling set aside to one side of the egg mixture and flip, so it’s folded in half.

Flip once more for even cooking and remove from heat. Transfer to a plate, top with sliced avocado and salsa and enjoy.

This slightly spiced, tomato-based Mexican staple satisfies the craving for that authentic taco flavor, but we’ve swapped out the tortillas for a low-carb lettuce wrap to keep things a little less starch-heavy.

Set chicken breasts in a large pot, and add enough water so the meat is submerged. Add a pinch of salt.

When water begins to boil, set the stovetop to simmer and let sit until chicken is properly cooked.

Remove chicken from pan and shred.

In a large skillet, add oil and heat on medium-high. Add tomatoes and garlic, cooking for about seven minutes. Remove from skillet and add to a blender or food processor. Add chipotle peppers and blend. Then add one cup of water to the tomato mixture and blend once more.

In the same skillet, add onions and cook for about five minutes, or until onions have become translucent. Add tomato mixture back to the skillet as well as the chicken and heat all the way through.

Keep chicken and salsa warm on the stove and prepare the greens.

Wash and dry lettuce and spoon chicken tinga mixture into the center of the lettuce leaves. Top with fresh cilantro and diced avocado.

For those nights, you want to end on a high note — you just finished with the gym and looking to keep things going in your favor — this taco salad recipe is just what you need. Loaded with beans, veggies and heart-healthy quinoa, this salad is hearty and fresh all at the same time.

Cut the sweet potato into cubes and place in a microwave-safe bowl with a couple of teaspoons of water. Microwave on high for about five minutes or until soft.

In a large saucepan, add garlic, onion, and sauté with olive oil for about five minutes. Add beans and cumin and let simmer for about 10 minutes.

A simple alternative to ground beef tacos, this lean turkey recipe can easily be dressed up with a range of veggies, perfect for when you’re trying to eat a little less fat. We went with whole-wheat tortillas, but this could just as easily be turned into a taco salad or slipped inside a crunchy taco.

In a large skillet, add onions and olive oil. Cook onions until translucent, which should take about three to five minutes. Add turkey, along with cayenne pepper, garlic powder cumin and paprika.

Mix thoroughly and brown the turkey on medium heat. This process should take about five to seven minutes.

In a separate pan, heat tortillas and set aside.

Remove from heat and assemble tacos. Add meat to the tortillas and top with kale, cilantro and pico de gallo.

Fish tacos are a summertime favorite, light, fresh, and perfect with just a hint of salsa and veggies. We’ve topped our fish taco recipe with pineapple salsa for a lighter take on this fishy treat, rather than the typical cream sauce.

• One cup of cut pineapple
• ¼ cup of fresh cilantro
• ¼ cup of chopped onions
• One avocado, pitted and cut into cubes
• One jalapeno peppers
• ¼ cup of lemon juice
• One pound of white fish — tilapia, catfish, halibut are all good options
• ¼ teaspoon of cumin
• ½ teaspoon of chili powder
• ½ teaspoon of garlic powder
• One tablespoon of olive oil
• One cup of shredded red cabbage
• Salt and pepper
• Six to eight tortillas or lettuce wraps

In a mixing bowl, add pineapple, lemon juice, cilantro, jalapenos, onions and avocado. Mix and set aside in the fridge.

In a small bowl, mix cumin, garlic powder, chili powder, salt and pepper. Place fish on a clean surface and coat with olive oil, then cover in spices.

In a large skillet, add fish and cook on medium high heat for about three minutes on each side, or until it’s been cooked all the way through. Fish may break apart during cooking.

Remove from heat and assemble tacos. Divide fish among tortillas and top with cabbage and the pineapple salsa and serve.

An excellent alternative to basic beans and a hearty option for the meatless among us, this legume-centric dinner can be topped with cheese and salsa or whatever else your heart desires. Plus, it’s pretty easy for those nights where dinner feels like a chore. Feel free to add extra veggies into the equation or skip the cheese to make it vegan.

In a skillet, heat garlic, mushrooms and onion with olive oil and reduce heat to a simmer. Let sauté for three minutes and add lentils, cumin and chili powder.

Stir in the kale and let the whole mixture cook on low heat for about five minutes.

Scoop mixture onto tortillas, and then top with salsa and cheese, if desired.

Tortilla soup is not exactly a taco, but with many of the same ingredients as its “in-the-shell” counterparts, we feel this is a great healthy way to get your taco fix on a night that calls for soup. Top with tortilla strips, cheese or your favorite guacamole, and there you have it — a delightful taco soup recipe that hits all the right spots.

Preheat the oven to 400 degrees. Meanwhile, mix cumin and chili powder with salt and pepper. On a large baking sheet, coat chicken breasts with one tablespoon of olive oil and sprinkle spice blend over both sides. Set aside the remaining spices to use in the soup.

Place chicken in the oven for about 20 minutes and remove from heat. Use a fork to shred the meat and set aside.

In a large pot, heat olive oil over low to medium heat. Then and add onions, garlic and bell peppers to the Xtrema ceramic pot and cook in the oil for about five minutes.

Add beans, broth, tomato paste, tomatoes, jalapenos and green chiles and then add the shredded chicken and the remainder of the spice mix.

Bring the contents of the pot to a boil and then lower the heat to a simmer. Leave on the stove for about 45 minutes, and then stir in the tortilla pieces.

Remove from heat and serve. Top with garnishes if desired or eat on its own.

What Are You Waiting For? Try a New Taco Recipe Tonight

Of course, tacos in their many forms are the perfect meal — filling and tasty. They’re also adaptable to any dietary restriction you can think of. There’s a taco for everyone — vegan, paleo or just something lighter for a midweek meal.

At Ceramcor, our wide selection of Xtrema cookware, Ovenex bakeware and utensils make it easy to cook a healthy meal at home, whether you’re preparing for a special occasion or just reheating some leftovers. We’ve got skillets for browning meat and sautéing veggies and plenty of pots for hearty soups. Check out our products to see what we’ve got cooking. Changing how America cooks one home at a time.